Grit and Patience - From Poker to Programming 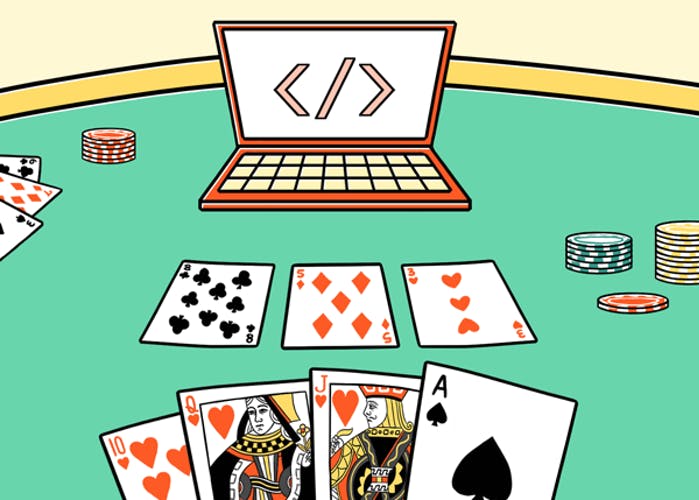 Kevin got into programming when he was in high school. He had always liked technology and could be found in front of the computer more often than not. It seemed like the next logical step was to learn more about them. He took intro to C++ and Java, really enjoying the process of having an idea and turning it into an application. With that positive experience Kevin started college with a major in computer engineering.

Two years in and he wasn’t so sure about it anymore. Kevin was struggling with introversion, convinced it was holding him back. Trying to figure out what he wanted to do and where he wanted to go, he switched majors to communications hoping it would make him more personable and open.

Graduation found Kevin at a fork in his life. On the one hand he had a communications degree and a potential career he wasn’t sure he wanted. On the other hand was poker.

Kevin had started playing poker in high school, just small games for small stakes with friends, but when his college ran a weekly poker game he really got into it. He was good at it, to the point where he was making a decent amount of money. It was then that an opportunity arose.

Two of his friends were going to start a poker house and wanted Kevin to be a part of it. Up until now he had kept poker a secret from his parents, but as the house would be in Virginia and he was living in Pittsburgh he had to tell them eventually. Thankfully they gave him their blessing and the poker house was founded.

Playing poker professionally was a rewarding experience. Kevin could be his own boss and set his own schedule. The house had a startup vibe to it and was doing well. After three years however he began to feel there was a cap on poker. He wasn’t growing any more as a person, and the last thing he wanted was to become that fifty year old guy still grinding away miserably at the casino - he had seen people like that and was determined not to become one of them.

With the help and advice of two cousins, both software engineers, Kevin made up his mind to go back to his programming roots. Within a week he had quit the poker house and moved to New York to stay with one of his cousins. He made the move in February 2020 so you can imagine how hectic that transition must have been.

Originally Kevin planned to attend a bootcamp. He had been accepted into Hack Reactor but with the onset of the pandemic they had announced they were going remote. His cousins convinced him that there was nothing the bootcamp would have taught him that he couldn't learn on his own, and so deciding to save some money Kevin got to work teaching himself. For the next eight months Kevin studied JavaScript and React. He tried to learn as much programming as he could, working eight to twelve hours everyday, always making new projects to build up his resume and portfolio. In this time Kevin learned a lot about front end development.

Kevin became interested in backend development hoping it would open up more opportunities for him. His cousin had a friend who had completed the Hatchways co-op program the year before and landed a job at a startup. This got Kevin interested in it. While he had learned much on his own, a work environment where he was part of a team communicating with others and getting real work experience was invaluable. Hatchways supported Kevin through the job searching process with behavioural and technical interview prep, and with soft skills like following up to emails.

Before signing up with Hatchways Kevin had been applying to jobs. In a two month span he would apply to about 300 jobs and only manage to get five interviews - none going further than the technical interview. After Hatchways Kevin was getting a higher number of interviews and getting further and deeper into them. In a handful of months he had four or five final interviews. While it was always hard getting that close and then falling short in the last round, in the back of his mind Kevin knew that it was only a matter of time now. He was getting closer and closer and if he kept going, kept putting in the work and getting back to the grind it would pay off. It’s one of the things he says he’s most proud of, bouncing back from rejection and continuing to work on his skills so he could come back stronger.

In a few months Kevin saw his determination pay off. Hatchways got him an interview with Safepay, a credit card processing company based in Pakistan and funded by Stripe and Y Combinator. The interview process was smooth and cordial. They had seen his Hatchways profile and liked his work so much Kevin didn’t need to do a technical interview. After three rounds of interviews talking with different members of the small team, Kevin got an offer for a front-end developer role. At the time of writing he has just started his new job.

What Kevin says he really appreciates about Hatchways is that they help new developers shine in their strengths. While Kevin had been learning fullstack, front end is where his greatest strengths lie, and that’s what he’s been hired to do.

Getting there was a tough process. There were moments where he doubted himself, unsure if it was really worth it. It often felt like an uphill battle without a CS degree when so many applications require one. Kevin decided to never give up and to stick with it no matter what.

If his earlier studies of programming helped him at all, it was in giving him a base framework in how he thought about programming, something those going into developing with no previous experience would find challenging. Kevin began his self-taught journey being familiar with C++ and Java, but getting back into things after a few years created some friction. Perhaps the one good thing about being stuck in quarantine, Kevin shared, was being stuck at home all day with zero distractions. It was the ideal time to learn.

As a student Kevin hadn’t known what the future of programming would be. He didn’t even know that there were front end or backend positions. It was all just programming. He had no idea what he wanted to do and so he put programming in the backseat to focus on other things. Kevin has heard that college computer engineering programs are more theoretical and don’t teach you how to be work ready. If he had stuck with programming in college or hadn’t played poker professionally, who could say where he would have ended up?

Parts of Kevin’s poker background have helped him in his new career. Poker is about having patience and grit. There are lull periods and downswings that are entirely out of your control. Programming is like that as well. Poker is played with eight other people, and as a professional Kevin felt it was important to create a social dynamic at the table. Not just to read people but to keep other players happy and to make real human-to-human connections. Poker helped him open up more. Kevin had always believed introversion was something he was born with but once he started opening up he found it came more and more naturally. He met some of his best friends through poker. Now he has much less fear and anxiety around meeting new people.

Kevin is thankful for the support Hatchways gave him and calls it the best decision he made in 2020 in terms of career growth. To any newcomers he would tell them to use Hatchways resources as much as they can and to not be afraid to ask questions. The team is there to help and cares about your success.

For those just starting out in tech, Kevin says you have to have grit. It’s a competitive industry. He truly believes that if anyone puts their heart and mind into programming, no matter the language or technology, so long as you give it your all and don’t give up, you can make it. It means accepting that there will be days when you need help, and that needing help is nothing to be ashamed of. Keep yourself busy. Take breaks when you need to, but keep working and applying technologies to real applications to help you learn. Your hard work will pay off.