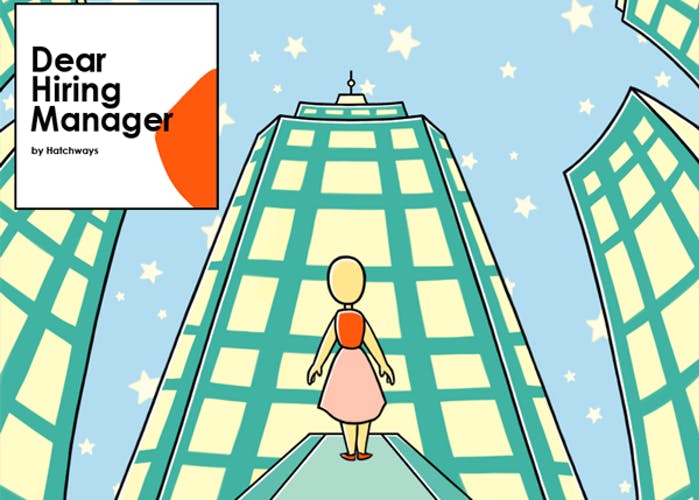 On Hatchways’ podcast ‘Dear Hiring Manager’ we interviewed Michelle, a first generation Asian American woman who grew up in an under-resourced neighbourhood in San Francisco. She knew she would be a minority in the tech field but she had no way of knowing just how difficult being a woman in tech would really be.

Growing up, Michelle had very little support for her big dreams of being a software developer as just getting a basic education was a struggle in her community. She shares her experiences of dealing with imposter syndrome, interning at a company where every employee was an older white man, and the challenges she faced during interviews when trying to solve coding problems as well as stand up for herself and deal with the social aspect.

We discuss the importance of having representation, ways that women can be supported in the workplace, and how tech companies can better implement diversity to be a core value instead of an afterthought.

Growing up in a First-Gen family in San Fransisco

Michelle: I come from a neighbourhood in San Francisco that’s full of minorities. And I was someone who decided to leave as far as possible because I really didn’t like the place that I came from. It was really disturbing to me to see a lot of minorities kind of, not really have the opportunity to find a career and learn what coding was, to have this opportunity that’s like literally in the same city, in San Francisco there’s so many tech companies. How do people in my neighbourhood get there, how does that work? How do we share the wealth happening in the city?

Growing up without a Role Model

Michelle: The first time that I had a role model actually was at this math and science camp. I just remember that woman who was sitting there was an Asian American woman. I was like, oh I can like see myself at least a little bit in her, a little bit of my identity I see in her, just my face, you know. And I was like, ok I’m just gonna remember her whenever I like, don’t have somewhere to go. Just remember that she is someone that’s out there that kind of looked like me, who has made it somewhere else in this world, outside of her parental unit.

Getting an Internship in Tech as a Woman of Colour

Jaclyn: Can you talk me through some of your experiences that you had, some of the challenges that you faced?

Michelle: I felt like I was fake, like I faked my way through, I was just this small Chinese girl, why was she in this corporate building? Nobody was friendly and warm, which is who was.

Leadership in the Workplace

Jaclyn: How can employers be more supportive to help employees, or new employees be themselves and have that comfortability around their coworkers?

Michelle: Leadership has the power to decide how they recruit and where they recruit from. So my suggestion would honestly be just recruit from more diverse colleges - stop putting emphasis on these high performing schools that are dominated by cultures of like, all white and asian men in tech.

Michelle: The most important thing is to have a mission, and have values. In the end tech companies should, every single tech company should have a value of achieving diversity within, across the industry. And I really can't wait till more people finesse their ways into the institution and get to the top, and change things from the top down.

Listen to the full episode here

Dear Hiring Manager is a space where we share the stories and experiences of real software engineers trying to break into the tech industry, and open up conversations about the shortfalls of the traditional hiring process. We give voice to those who fall between the cracks in the system, and discuss how we can make the future of the tech industry more inclusive to those facing barriers and coming from non-traditional backgrounds.

If you would like to be a part of the podcast, or if you have questions you'd like to ask future job seekers on the podcast, email us at hello@hatchways.io