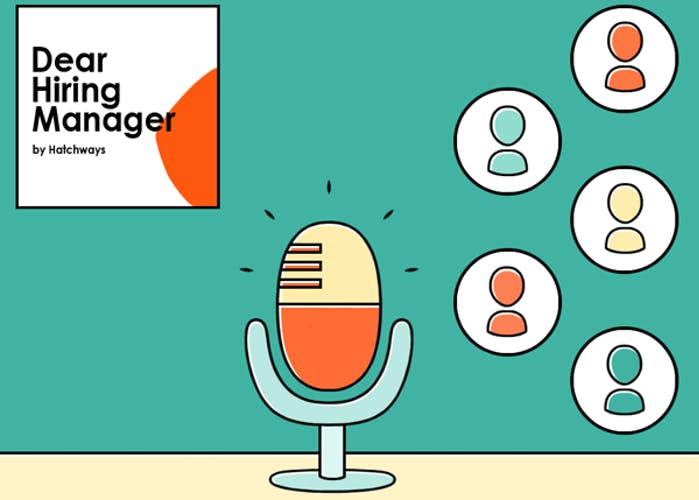 Dear Hiring Manager is a space where we share the stories and experiences of real software engineers trying to break into the tech industry, and open up conversations about the shortfalls of the traditional hiring process. We give voice to those who fall between the cracks in the system, and discuss how we can make the future of the tech industry more inclusive to those facing barriers and coming from non-traditional backgrounds. Today we’ll be taking a look at episodes 1 - 5 and going over some key points in each developer’s story.

I interviewed five vastly different developers who all had pretty common feedback about the hiring process.

Here are our ten takeaways:

1. Sam and Michelle found that the environment of anxiety created by the technical interview made it difficult to focus on answering correctly, even when they could solve the questions under normal circumstances. Interviews are stressful, and under high pressure circumstances focusing on coding challenges is much more difficult than it would be in normal circumstances. Due to poor performance, people who experience high anxiety in an interview are more likely to answer incorrectly, and have their skills falsely assessed as less than they are.

2. Evan and Jimmy both wanted a coding challenge to assess their skills rather than an interview. Lacking credentials or doing poorly during the interview can prevent talented software developers from having a chance to actually show off their skills. By assessing the coding ability of developers through a coding test, the employer will have a better idea of what they are really capable of. More so than through technical interviews, as employers can have a better grasp of their skills. Skilled developers are being overlooked through arbitrary hiring biases and through poor performances during behavioural interviews.

3. Representation matters. Michelle saw barely any other women in tech workplaces and was not treated as an equal by her male counterparts. Because of this, she felt like she had no chance of a successful career.  Without any other women in tech to look up to, Michelle felt like she had no place in the workplace. She could see no prospects for herself as a developer and no chance to succeed as tech companies simply did not seem to have places for women.

4. Aécio, Sam and Evan all face disabilities that are not a problem in the workplace, but make it difficult to perform well during the high pressure environment of an interview. Disabilities make it difficult to get through the interview process, either through interviewer bias, accommodations not being made, or the stress of the interview making it harder to perform well. This inaccurately reflects workplace conditions, as all are capable and competent developers only held back through traditional hiring conventions.

5. Jimmy’s applications were overlooked as despite having impressive coding projects, he had no degree or credential. Even if he did well during a technical interview, employers would choose a developer with a degree over Jimmy based on an arbitrary bias. Without a degree or certification, employers wouldn’t even look at Jimmy’s resume. A degree isn’t needed to be a competent developer, yet employers prefer a developer with certification over one without it - regardless of their actual skills. Many employers were impressed by Jimmy’s projects, yet would reject him on principle for not having a degree.

6. Both Aécio and Sam mentioned phone interviews were their least favourite part of the interview process. Aécio because of his hearing impairment and Sam because of his stutter. Phone interviews are used as a quick way to screen candidates and narrow down potential hires. Yet for Aécio and Sam, communicating through a purely verbal channel disadvantages them right from the start. They may not even get a chance to show off their software development skills before being rejected outright.

7. Michelle states that if companies want diversity in the workplace they must commit to it as a core value rather than as an afterthought. This means hiring from more diverse pipelines, reaching out to the community to help teach code to underrepresented groups, and listening to underrepresented groups in the workplace. There cannot be workplace diversity if companies don’t hire from more diverse pipelines, and make an effort to support and listen to minorities in tech.

8. Aécio points out that the tech industry is uniquely qualified to be the most accessible field for those with disabilities, as making tech is what they do. Tech workplaces should reflect this. With very minor accommodations life can be much easier for those with disabilities, and give them an equal chance of being hired. Disabilities shouldn’t be a barrier to employment in a field known for creating solutions through technology.

9. Michelle and Evan both wanted job postings to say more about company culture, what the job entails, and what working there day-to-day would really be like. Knowing more about the company and what working conditions are going to be like will give applicants a better idea of the job, and is more likely to attract the sort of people the company wants to hire - and give those who don’t want to work in that environment a heads up to avoid it.

10. All five developers came from different backgrounds and had different experiences, yet all faced barriers navigating the traditional hiring process. There’s no reason any of these perfectly competent developers should have trouble getting a job, especially as they are fully capable of working well in an actual workplace. Yet the format and culture of traditional hiring processes and of the interviews are arranged in such a way to directly and unfairly disadvantage all of them.

Whether it is discrimination, dismissing skills for lacking credentials, or the circumstances of the interview creating disproportionately poor performances, the hiring process has prevented all of them from employment based on arbitrary practices that don’t give an accurate idea of their skills.

If you’re interested in learning more about any individual interview you can find them on Apple podcasts or Spotify. We hope we can continue to open up conversations about people who come from non-traditional backgrounds and how we should create a more inclusive hiring process.