Bootcamps Part 1 - What are Coding Bootcamps? 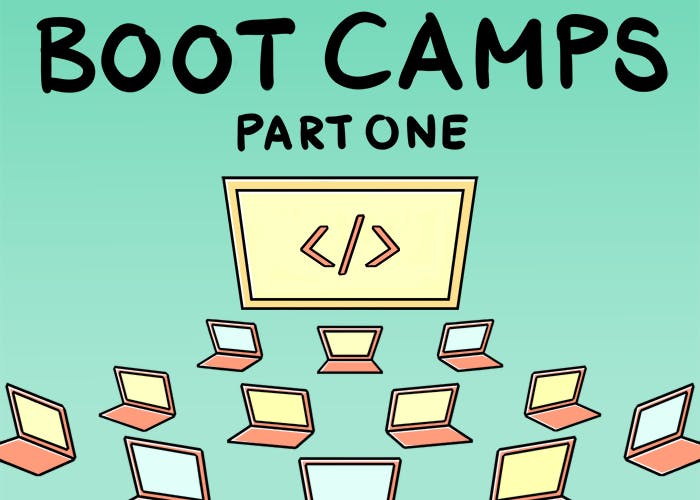 This is Part One on Bootcamps. Part Two 'Critiques and the Future of Coding Bootcamps' can be found here.

Coding Bootcamps are short, intensive courses that teach coding skills. Students are job-ready and able to start a new career as programmers once they graduate.

While Boot Camps have long existed as a form of intensive physical training, the Coding Bootcamp only came around during the early 2010s. Their story is one of demand and a lack of supply, and the attempt to solve that problem as quickly as possible.

The History of Coding Bootcamps

The first Coding Bootcamps arrived in 2012. Codecademy, Dev Bootcamp, and HackerSchool all opened within a few months of each other, offering 2-3 month classes, and using project-based programs to teach students tech skills quickly.

HackerSchool had no tuition fee, and taught advanced skills to those with basic tech knowledge. Codecademy and Dev Bootcamp taught all skill levels of students. All three relied on graduate job placement as their main source of income.

Dev Bootcamp was launched in San Francisco by Sheeref Bishay, offering a ten week program and promising that any who took it would be ready to start a career in programming upon completion. It focused on Ruby On Rails, offered 400+ hours of training, and cost $11,500 to enroll. The first session had 200 applicants, with only twenty chosen to participate. Instead of a traditional interview process, Dev Bootcamp had thirty employers ‘speed date’ graduates to get jobs. Once a graduate was hired, Dev Bootcamp earned a finders fee, and reimbursed the graduate with $5,000.

After the success of these initial Coding Bootcamps, more began to open. According to a recent article: “Since 2013, the number of Bootcamps in the US has increased nine times to 108, and with over 20,000 graduates in 2018.”

But what was the driving factor behind Coding Bootcamps? How do they work, and what do they do?

Coding Bootcamps were created to solve the problem of companies not finding the tech talent they needed. The tech industry is still relatively new and known for tremendous growth and change in very little time, and while young companies were working to build their platforms and apps as fast as they could, with no trained workforce to support them, their growth was hindered.

Designed to train those with little or no coding experience, Coding Bootcamps answered the demand for skilled tech workers quickly and efficiently by producing job-ready programmers. A fast track to employment, compared to traditional education institutions Bootcamps have lower tuition costs, shorter class times, and offer a more practical curriculum. This allows them to increase access to tech education to a much wider range of people, creating a supply of much needed tech talent.

Bootcamps can offer full-time, part-time, and even remote classes. Part-time classes teach basic coding like HTML and JavaScript, or will teach a set of very specific skills. Full-time courses on the other hand, are both more immersive and more expansive.

The vast majority of Coding Bootcamps are run in the U.S. and Canada. 73% of these are in-person only, 15% are online-only, and the rest do a mixture of both. Bootcamps generally offer less than fifteen programs each, with the exception of General Assembly, with 115 programs on offer. Course Report tells us that 23,000 students were enrolled in North American Bootcamps in 2019. This number is eleven times more than what was reported in 2013, and came to a total revenue of US$309 million.

Students of Bootcamps learn from experienced developers, compressing the apprenticeship model into a mere few months. The idea is to immerse students in an intensive program where an instructor can guide and help them with the material, so they can be ready to work in as short a time as possible.

Since 2016, Coding Bootcamps have been partnering with Universities and Colleges. Some are taught on campus and run by professors, and some might offer credit - it all varies widely from each institution.

While many Bootcamps offer degrees, non-degree Bootcamps are around as well. These focus on training beginners basic coding skills that will allow them to apply for junior developer positions, and tend to run for an average of 15.1 weeks.

A 2019 Course Report study found the average University level Computer Science program is four years long, and costs approximately $163,140 in tuition. Those with Bachelor Degrees earn around $59,124. Coding Bootcamps however, average as taking less than fourteen weeks, cost on average US$13,600, and have graduates earning $70,698.

The study looked at 1450 Bootcamp graduates, and found that while most earned $79,944 at their second job post-graduation, grads saw their earnings rise to $90,421 at their third job from graduation. The typical Coding Bootcamp graduate can see their salary increase 25% with each progression in their career.

In 2015, Lighthouse Labs found that of 135 graduates who responded to their survey, 81% were still working as software developers three years later, earning an average of $85,200.

In 2017, coding schools graduated around half as many students as accredited Colleges and Universities together. This is largely due to Bootcamps being taken by working adults with majors that didn’t bring them the careers they hoped for. We can see this exemplified by looking at the average student enrolled in Codeup Bootcamp: between 25-35 years old, having a degree in an industry that’s not in demand, and looking to change their career.

Many people with traditional higher education find that even after four or more years spent getting a bachelor’s degree, they still aren’t qualified for the jobs they want. Bootcamps offer a way out, an alternative path to better employment and a more fulfilling career, slashing the cost and the time of a higher education degree and providing better results. This also allows underrepresented groups to get into the tech industry - an industry that needs as many skilled workers as it can get, as 1.4 million jobs need to be filled by 2020.

As the tech industry is one of near constant growth and change, the Bootcamp format allows updating their curriculums with each change of the tech landscape to be an easier process, something which gives them an advantage.

Some Bootcamps are looking to replace college education entirely, training students right out of high school for their first jobs. No one can argue that Bootcamps provide a much more timely and cost efficient experience than higher education institutions - though perhaps they lack in providing a well rounded education and a deeper understanding of the subject matter.